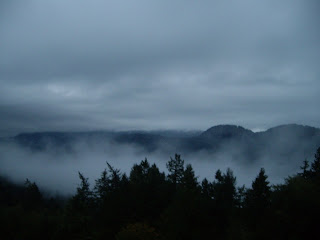 Today I awake with such gratitude. This is what the early morning mist looks like. It feels like the softest garment to me, woven of angel wings. I am in love with this climate and this view. I was like a hyper active child yesterday as I ventured “off island” to pick up my son and friend. It was a day of delights. First this misty view……then drove and parked my car in the ferry line up. I walked down the to small store to get a cup of something hot and a muffin. An elderly gentleman joined me at the coffee pots. He had on one of those Greek fisherman type caps. I told him that it suited him fine and how much I admired it. He laughed and said that he had been wearing such a cap for 70 years! Imagine that! I asked if he was indeed a fisherman and he told me, “No, but I have been a sailor and a water man all my life.” He had such a lovely smile and it was a great encounter to start my day. I then walked down to the docks to see what I could see. I was looking at the water under the piers and saw a starfish floating on the bottom. I was amazed at how clear the water was. It was fun to see the 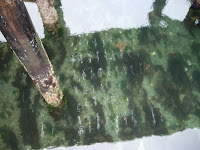 sea ferns and fish floating there. I liked how the photo turned out as it looks like a painting to me, so soft and abstract. Just as we can look at any situation in life through a soft filter as it were and it seems to become more beautiful. We can let go the hard “reality” filter, soften our eyes and let the scene become more indistinct to find its beauty. Yes, I like that!! We are taught that we have to facet the reality of everything yet perhaps, as is the case in most things, we only have to let it go a bit fuzzy to understand it in a new way. 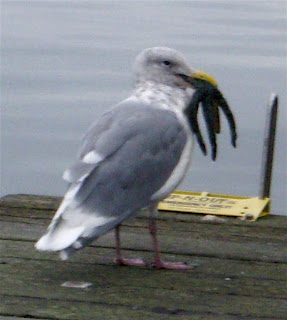 Here is who I met next on my morning stroll. Isn’t he a hoot?? He was a ways down the dock and as I tried to approach to see what exactly he had in his mouth, he would walk ahead. He kept turning back to see what I was doing. I explained that I simply wanted to take his picture and certainly was not going to take his starfish! He was not buying it. Imagine, a starfish hanging out of his mouth! A new experience for me. I was enthralled. As he reached the end of the dock and turned to see me still approaching, he had a decision to make. He wanted to eat his tasty morsel in peace and had not counted on my intrusion. I asked him to turn his head towards me one more time when I got this shot and then I would leave him. He did not trust that I was not going to snatch his delicacy and so reluctantly, he hopped off the pier and into the water. He swam a little ways away and climbed out on the shore. As I stood there drinking my coffee and nibbling my muffin, he had his breakfast of starfish. He took a large gulp and an arm disappeared. Itwas quite a lot to get down and I did not see him finish his meal before the announcement came to return to our cars as it was loading time. I thanked him for sharing a breakfast meeting with me.
The ferry ride was delightful. It is an hour and a half ride so one of the ways that folks pass the time is by doing jigsaw puzzles. There are a dozen or so in different stages of completion 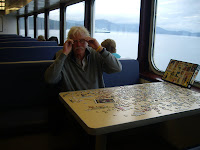 scattered about the tables. I spoke with this man about the joys of puzzle making. I quickly found a few pieces (edge ones with writing, easy) to put together and he said, “Enough! I have been here ten minutes and have not found a one and you walk up and find a few.” We had a laugh and exchanged stories. He was traveling about by train, ferry, bus…whatever form of transportation suited him. He was thoroughly enjoying all the connections with folks that these forms of transportation bring. I have met so many folks who are on a journey, searching for something. We are returning to our nomadic routes, wanting more connections and delights in our lives. I then walked past a man who was sketching something on a piece of paper. I asked what he was drawing. He was a cabinet maker and was sketching a design for his latest project. He had left his life as a stockbroker years before and traveled by bicycle all around the USA. He now lived on the island and did a number of different things. He had a summer gig working for the parks and rec dept and his job was to turn the human manure in the composting toilets as well as some record keeping and measurements. Might not sound like fun but he had visited hundreds of tiny spits of an island all over this archipelago (he told me that there are about 700 islands!!) He goes out in his land craft type boat as many places have no pier or dock to tie up to, and does his thing. How fun! He gardens on some of the estates on the island as well as does some cabinet making. Island folk are very resourceful it seems. His wife had had stomach cancer and when she survived, they decided life was short and it was time to truly live it. How beautiful and sad….beautiful they took the opportunity to create a magical life and sad that it takes a near death experience to allow folks to consider making a leap. He was a happy man. We exchanged info and are to meet later in the week. We ended with a hug and expressing, “I love you!” I am loving the heart to heart, deep contacts that I am sharing with so many folks. People are so beautiful and my heart is on fire with this knowing!