I did not walk six miles that da 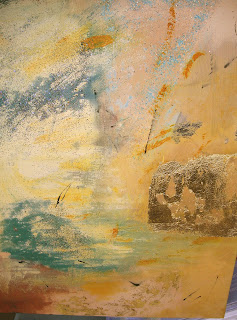 y…walked about a mile or two and then saw an enticing spot to swim. There was a steep bank and I inadvertently descended on my butt and slid to the water’s edge! The water felt great after my rather dramatic approach. I floated on my back until my ears got too cold. It felt so magical; cold water, big powerful mountain, sunshine, trees. Heaven. When I rested on the shore, I watched two ducks swimming by. I watched the male leading and the female swimming along behind. And a new thought came: the male was activating the “thrust” into the world, opening the way. The female was flowing with the opening, allowing her feminine nature to move gracefully along. I felt such deep resonance with this as of late, my thrusting into the world energy has deserted me. My feminine is ready for a male to take the lead and move first into the world, allowing my feminine to be sheltered so as to flow freely. This feels so different from the way I always saw it before..the female docilely following along. We were taught to rebel against that image yet I did just that for much of my life, allowing my partner to call the tune that I stepped to. I would not have said that was what I did, but in hindsight, I was constantly taking my cues from his emotional state and adjusting my behavior accordingly.

Nature is speaking to me in new ways. Or perhaps, I am tuning into her messages these days. New eyes, new thoughts, new ways of moving in the world. In Tom Kenyon’s and Judi Sion’s Mary Magdalene book:

The Magdalen Manuscript: The Alchemies of Horus & the Sex Magic of Isis

Mary talks about how the woman can not truly let down and open herself until she feels totally safe and protected by the male. The males job is to provide that sense of safety and cherishment for the female. I am so ready for this as I have not experienced it in this lifetime. I ran the masculine energies predominately but now my feminine is crying out for this balance. I caught a sense of the beauty of it as the ducks shared their message with me. 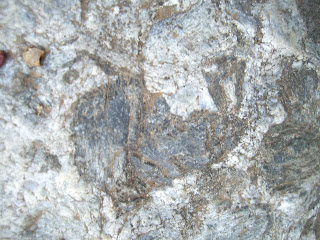 I love finding heart rocks and this was a heart image formed in the rock! Mother Nature saying, “I love you!” And I love her so. I have noticed so many trees beginning to turn color already, fall is in the air. I commented on this to a friend as we were discussing the discomfort in our calves and feet as we are being more fully grounded to our mother. She shared the calf issue (don’t you love when others are having similar symptoms, somehow it makes it feel better) and also her dialogue with the elementals. She said that they are so excited about all the changes coming, that they are hurrying the seasons. They want to share in our joy as we move into this new energy and world. I felt the rightness of that go through me, yes, they are so excited! As are the angelic realms and as am I!

The painting is one of my recent ones and it made me think of the ducks and the flowing waters.