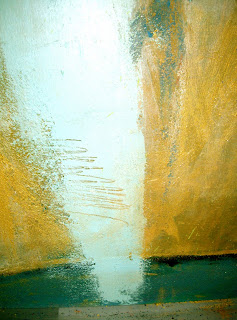 This is a painting from the first day, one that I am happy with. I call it Earth Flares. The bottom portion looked like the earth to me (I did not plan this) and the flares of energy coming off of her are a brilliant turquoise color. There are golden sparkles (I love golden sparkles!) and it is the energy of love and movement that I feel coming from our mother.

What a full week this has been. I left the art workshop each day too tired to blog or do much else besides rest. It was an amazing roller coaster ride of emotion. The first day was fun as it had been so long since I had held a paint

brush. I painted two canvases that I felt pleasure in. The second day I hit a wall. I stood in front of the canvas and cried. It brought up some deep emotion that I could not name. A feeling of not being able to create the beauty that I felt inside, a sadness that this was not my life, yet memories of having had lifetimes as a skilled artist were surfacing. A feeling of having had it taken from me and the heart wrenching sorrow that I felt. So many other lifetimes’ memories are surfacing these days in floating feelings, visions, bodily sensations. It was a day of painting and painting over canvases. The third day I awoke simply exhausted. I felt that I could sleep for a week. My friend and I were to go t

o the hardware store to buy cans of acrylic paint that would be cheaper than all the tubes we had purchased at the art store. We got lost and what should have taken 15 minutes, took an hour. We finally arrived at the store to find long line of contractors waiting for their paint to be mixed. We were already late for the class so we left. We were in quite a state, agitated. We came into the classroom spouting our anger. I told the instructor that I wanted to learn another technique besides his layering, pouring on sand and glitter and washing off layers. That is what he was doing over and over. It was interesting but I wanted more for my money. I was not going to spend any more money on paint or supplies…it had been too much. Whew…..the instructor said to use the anger to fuel my painting. Hmmm. It did blow over and as he talked about experimentation being the teacher I realized that he had no more techniques to share. He had an open heart and that was the gift that he offered. I settled down and observed 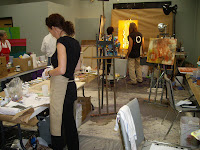 myself. It had been so long since intense anger ha

d moved through me. I know that much of the denser emotions are being released from the earth. I accept the anger. The trick is to feel it and then to allow it to move through and to not let it get into the mental loop where it replays itself. I had to remind myself to feel it fully and let it go. Layers and layers are being uncovered as we find that point of inner stillness. I saw that I need to keep my body rested. Fatigue leads to a downward spiral as the emotional body is not supported. Water, not drinking enough in this 7000 foot altitude had its effect. Solitude. I am used to time alone and had not gifted myself with that. I saw that I need it on a daily basis. All of this is needed on a daily basis. I cannot go for a week and then try to “catch up” with rest and alone time. I have followed that pattern for a long time now but it is no longer viable. I need to listen and respond to how my physical, emotional and spiritual bodies are changing. I need to address those changes.

The fourth day of class began with a bouquet of flowers to the teacher. That set the joyful tone that resonated throughout the day as I love to give flowers to others. I felt pleased with some of my pieces. I worked for quite a time on a piece that I ended up cleaning my brushes on as I painted it over. I played with it a bit and the teacher felt that it was my best piece…the one that took the least amount of time. Interesting. I saw how I had become good at getting out of my own way as my higher self or Archangel Michael wishes to channel through a message to me or another. I am skilled at listening to that still voice inside and following its guidance. This same skill was needed for my art. To let go of my mental mind with its judgments and notions. To allow my heart to guide my brush across the canvas and see what comes of the process. Abstract art is about the feeling rather than an attempt at representation. It is what I love about it as a certain piece will call out something from inside of me. 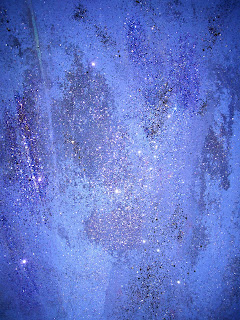 This piece is one that I created using the teacher’s methods. I call it Violet Flame as it is how I visualize the violet flame surrounding me.

The class ended well. My friend found her voice again as an artist. She crossed a threshold that she had passed many times before but now in her sixties, she could truly begin to give herself to her passion. It was joyful to behold the depths of her feelings as she vowed to not abandon her art again. There is such power in making a commitment with oneself. I have vowed not to abandon myself ever again. I am the one that I owe my first allegiance to. There were so many years when I put myself last and gave away my own power. Now I honor myself and this week has shown me new ways to do that. For this, I am grateful.

I had the sense on my drive to Santa Fe that there was a ceremony to be done with the two women that I was spending my time. It did not happen and I watched my mental mind process that. Part of me wanted to have my friends “see me” channel. Hmm, interesting. The ego looking for some stroking. I had a talk with Henry (my ego) and reminded him that we are in service to Sophia, my I AM presence and need no strokes from outside of ourselves. He sighed and accepted this.

The next day was one of rest and rejuvenation in a lovely Japanese bathhouse called 10,000 Waves. It is so simply done and so peaceful. We soaked in the hot tub, laid in the sauna and rested under the shade of the trees. There are separate women and men baths so you can be nude without any fear of distorted male energy interfering with your relaxation. It was lovely. I took a nap in a room where you could lay down, don a set of headphones that piped in meditative music and drift off. I especially enjoyed this as I get so sleepy from the hot tubs and crave to stretch out and nap. Bliss! All for $20 which felt like a deal. A great way to release all the emotions that had surfaced this week. I love water! I read that you can call on the water dragons to help with emotions that you are struggling with. I tried it and am happy to report that the dragons are here to help us, along with all the other kingdoms. I welcome the dragons into my life!