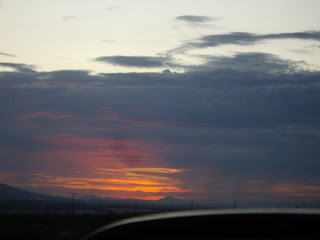 I awoke at 2:30am with the thought of getting on the road. I wanted to try to get through a big chunk of the desert before the heat of the day. I was gifted with a shooting star and then a glorious sunrise. Both made me a happy camper but then… yesterday had been a bit heavy with negative thoughts whirling in my head like a storm. Today followed in that vein. The new energies that we are living in are forcing out the old as it can no longer exist in the same space. Transparency, is also a welcome part of the new energy. All that was hidden is being revealed. This was the source of my negativity…I was given information about my former husband’s activities that was news to me. At the end of our marriage, after years of deceit, he had told me that he had shared everything and there were no more lies to be uncovered. I forgave him and ultimately got to the place where I told him that I released him from blame and thanked him for playing his role so well. But, lo and behold, this new energy that reveals all, brought to the fore that lies had been woven into the fabric of the 24 years of our marriage. There was much that was hidden. Five years after leaving and yet I still felt ill from this news. It took some major clearing work to release the layers of betrayal that it brought up once again. The hurt that keeps on hurting. Of course, that is my choice and I had to have a friend remind me to feel and embrace the pain and to then release it. To watch it move on through as it was only coming forward to be released. I felt compassion and right on its heels, gratitude for the freedom and joy for the life that I now live. Fortunately, the new also carries peace which is the vibration that I choose to live in. So, you can see it has been a challenging journey all by myself in my car!
Back to the story: So I was feeling the enormity of the distance in front of me and whined to my closest masters…(isn’t it always to those who are dearest to us that we reveal our whining selves!) Archangel Michael, El Morya, Mother Mary, Sophia, (my I Am Presence), I need your help and I need it now!
“I am tired of this driving about like a wild thing. This is my last trip like this. I need to see the picture of what this is. I want a place to call home and a dresser! I am so tired of digging in my trunk for stuff. Why oh why am I doing this yet again? Thousands of miles across the desert in the summer…please! I want to be on the coast feeling the ocean breeze.”
So a picture popped in. Complete, beautiful and the whine drained right out of my voice. I am 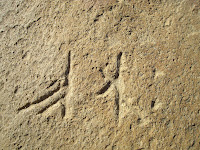 completing a loop that began last summer at Shiprock with a few other beautiful souls when we were told that we were bringing in the new earth matrix. We were told that it was an appointment that we had made 26, 000 years ago and the elders were delighted that we had all shown up. From there, our group drove and completed a circle that ended in Santa Fe. During this year, I have been traveling as the seed carrier and adding vibrations and codes. I recently spent time with all but two of the original folks, though I have been in contact by phone, email and energetically with the two. Many others contributed their vibrations and codes to the seeds. Mount Shasta and Shiprock work in concert as the male energies that were needed so that I could now return to plant the seeds in Santa Fe, a feminine power spot on the planet. I love these two mountains, so powerful in their maleness and yet so caring of me in my femininity. It is time for the return of the feminine and these seeds have been blessed with beautiful new codes and information. By driving the same route, I am completing the circle for the group. I saw the ribbon of light that was strung as I connected with so many people over this year. I saw how each one gave something to the seeds that I carry. I was the one chosen to do this, it is my work. I cried when the picture came in and felt such gratitude for the mystery and also precision of it all. It is so beautiful…we each have our parts to play and for the most part, are unaware of how grand the pageant truly is. We are all so beautiful!
The day goes on…there is more to release! I drove this route at this time last year with a friend accompanying me in her car to escort “the bride”. It was the drive to meet and merge with my beloved who I had met the month before. He and I had both prepared with healings, fastings, prayers and sweats. He in the sweat lodge of the tribal lands, me in my car by not using the air conditioning while I drove. (I found that it made me very sleepy which is not such a great idea when you are driving!) My friend sweated with me, helping me to prepare. The need for quickness was apparent then also as I was given a deadline that the merging had to take place by. Just as the completion of this circle has a timing to it that makes my rushing about these past two weeks, make sense. My friend helped me to see the growth that came of that union and how once again I am the bride to my own bridegroom. I have merged my masculine and feminine into the whole. Yes, I chose to breathe that in! It has been a long time coming and much heartache ensued to arrive at this balance point. So I felt the gratitude that this man had been able to hold the energy to complete what we were assigned. And I felt the sadness again of the separation, memories flooded in with the miles. When I finally was too tired to drive any further I saw a billboard for a reasonably priced motel and headed for it. Three things hit me strongly as I exited: it was the exit for El Morro Monument, the place where I had agreed to first meet this man alone, the sign in the other direction was to Shiprock, the place of our original meeting and a huge sign appeared that said, Sundance. This guy is a sundance altar chief. I felt a bit faint with so much coming at me at once but after finally getting out of the car (after 12 hours of driving) and having some food, I began to laugh. It was perfect! All the nudgings to allow me to clear the energies. I thanked the universe as well as myself for creating such beautiful pinpricks to allow me to step out of the old and be the empty vessel awaiting the new. I had asked for some magic and miracles today and I can see that my wish was granted.