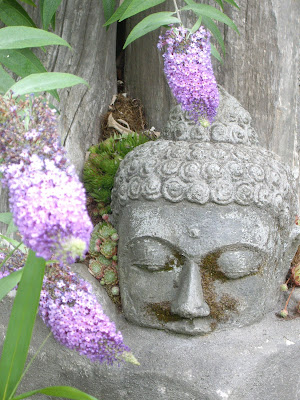 I love this Buddha head tucked onto a fence post, mosses placed so lovingly alongside of his head and the purple butterfly bush surrounding him with its beauty. Portland is such a fun city as a walk around its neighborhoods reveals such delights at every turn. I was inspired by the creativity and quirkiness that abounded. Small touches that made my soul feel alive. Images that filled my hands with the itch to create once again. Oh how I love beauty!! I know that I would resonate with the person who made this figure. I wonder if it is the same person who tucked the moss in alongside his head? Art and gardening seem to go together. Both expressions of beauty.
My time in Sacramento had its gifts. There was no sitting and praying for my father-in-law. Instead, folks were eating dinner around the casket and telling stories. There were secrets revealed that surprised me but fit into the family dynamic. I saw the gift of healing that had been offered by dad for the grandchildren and future generations. There is an opportunity to rewrite the records of the genetic coding so that the sexual distortion, manipulation energies and infidelity patterns can be released. I asked dad for the records that they might be transformed. He had been hiding them but handed them to me. I saw that now the opportunity was there for the grandchildren to choose to step out of the old records and step into a new paradigm. Ah…families carry so much heaviness and it is time to release the old. Our children and future generations deserve a clean slate and the wholeness that is true. As so many of the older generation pass at this time, so much weight is being lifted off the planet. They are gifting us with the opportunity to fill the space with love and light.
When I left late that night, I was feeling vulnerable. My two dear friends that usually host me, were both out of town. I did not feel that I could do a hotel as there are too many random energies present. I called a dear friend who had offered me a room many times. You know how people do and yet I had never taken him and his wife up on the offer. I had had a sense that I would sleep there one day. So, I called late at night and asked to stay. The response was immediate and clear..come. I felt like the storm child in one of Garrison Keillor’s Prairie Home Companion stories. He told how in the Midwest, children were assigned a storm family to go to if a storm struck while they were in school. If they lived too far out of town, they were to go to their storm family to wait it out. Garrison spoke of fantasizing about his storm family when his own family was not loving him or was upset with him for something. He knew that he would knock on the door, it would be opened and the man would call to his wife, “Honey, our storm child is here!” Garrison would be engulfed with such love, given hot chocolate with whipped cream and every thing his heart desired. The couple would heap praise on him and love him dearly. So, I was the storm child, being welcomed and loved. I was so grateful.
It was such a relief to be in a home of soft energies and love.
I lay on the bed and thought of all the places that I have stayed and how I was so ready to have my own bed awaiting me somewhere and my own space. It is time. There is a sense of rest that comes with your own space that is not present in others’ spaces, no matter how loving. I am ready for that! The total letting down. I enjoyed a couple of days in a hotel with a dear friend that I have not seen in too long. We watched movies, laid about and talked and laughed. It was rejuvenating. It was soon time to return up north to rejoin my friend for the last few days of her time in California. As I thought of driving up 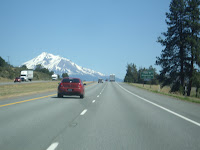 I-5 again, I heard Mount Shasta laughing at me. He said, “yes, I am calling you back. You will come and go integrate and come again. I have many gifts for you.” So, I was blessed with a clear day and Shasta blazing in all his glory. I stopped to fill my water
bottles at the headwaters and continued my drive up to Smith River. It is a beautiful spot along the coast, right on the border between California and Oregon. Lovely redwoods lining the way, mists and every shade of green.
A friend called and we spoke about expansion and contraction. It is all necessary to creation. We will feel anger and sadness, oneness and gladness. The in and out, We no longer have to figure it out, simply embrace it all and let it flow. My son shared his practice of moving a thought that is whirling in the mind mixer. He takes that mental activity and pulls it into his solar plexus and feels it. He breathes it in, the embracing. He breathes it out, the letting go. When we leave thoughts in our minds, they can go round and round. But this practice, releases them from that hamster wheel and allows mental freedom.
I felt a weight of sadness last night. It was not personal. It felt like somewhere on the planet that was experiencing some deep sorrow. I used this practice and added expanding my form into the cosmos. Soon the physical symptoms subsided and I returned to deep peace. A blessing.

4 thoughts on “Beauty in So Many Shades”